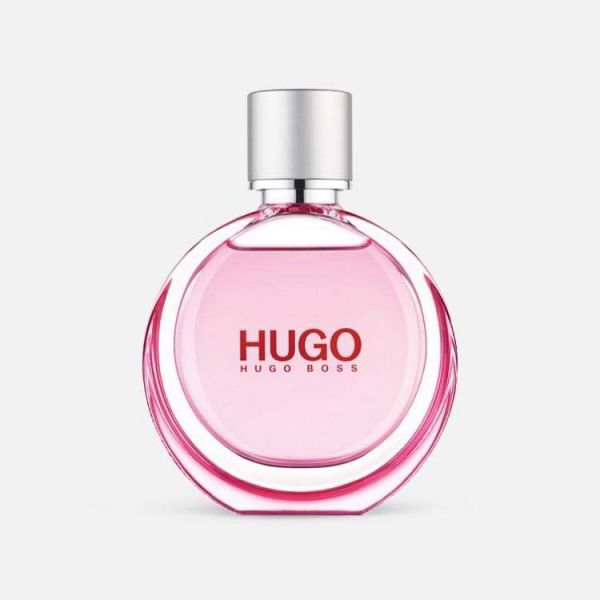 Woman seeks to add a new dimension to the basic perfumes of the world, with novel floral accords. The fragrance has been enriched with a bold heart to add sophistication and intensity. This is a woman whose real power lies in her ability to seduce her prey, when she wants something for herself. Hugo Woman Extreme by Hugo Boss is a Floral Fruity fragrance for women. Hugo Woman Extreme was launched in 2016. Built on contemporary aromas, it is a scent that defines its wearer as a confident but modern lady.

A crisp scent with fruity top notes of boysenberry and grass, followed by black tea and jasmine in the heart. Osmanthus is added to the base before a dry down to add a rich and warm aroma. It reveals her natural modernity, with a crispness of inspiration that is stripped of any artifice. The spirit of each fragrance celebrates the free spirit not imprisoned by conventions. Each note is embraced with entire freedom.

Hugo Boss is a global leader in the design and manufacture of premium menswear. Founded in 1924, Hugo Boss AG still has its headquarters in Metzingen, Germany, from where it controls its expanding worldwide network of subsidiaries and branch offices.

Hugo Boss offers a broad range of fashions and accessories for men, women, and children under its exclusive Hugo and Boss brands. Hugo Boss Black is a high-end line of sophisticated menswear that offers a modern take on the classics worn for work and formal occasions. The Boss Orange line features a selection of more casual clothing, with special attention to cut and fit. Boss Select is a collection of clothing inspired by the "athleisure" concept, with emphasis on fashionable styles suitable for wear at the gym as well as outside.

Hugo Boss fragrances are produced in Cologne, Germany. The company is well known for introducing fragrances marketed with an emphasis on their freshness, notably Hugo by Hugo Boss, The company produces fragrances in conjunction with Proctor & Gamble Prestige. Fragrances for men and women are offered under both the Boss and Hugo brands. The first fragrance was Boss Number One for men, launched in 1985, the company's second most widely recognized fragrance after its original namesake signature scent.

Hugo Energizing, Style for life. The fragrance that awakens your senses with classy undertones of sophistication and modernity. Energizing, exotic and alluring, the Hugo Boss fragrance for men has a powerful blend of masculine ingredients that create a style statement. In combination with an unparalleled sensibility, the scent delivers a bold burst of energy.