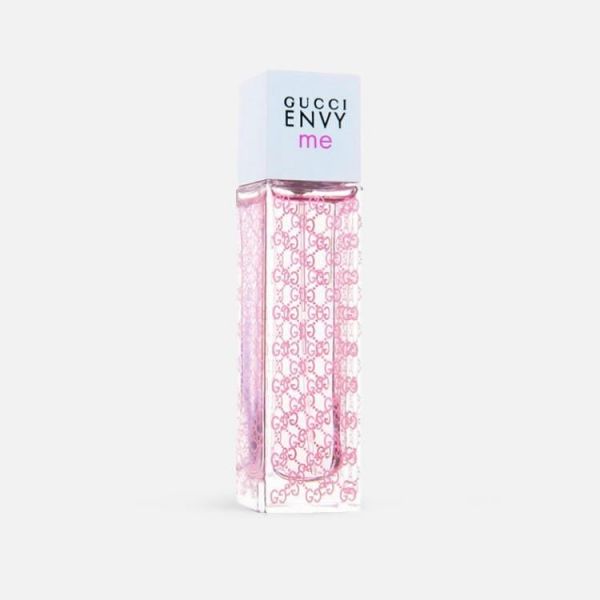 Envy Me by Gucci for Women

Seven years after the launch of Envy, Gucci introduced Envy Me. This was a fragrance for the egocentric and bold young woman. It was fruity-floral with fresh and musky accords: spicy notes of litchi and pomegranate, the freshness of water jasmine, a harmony of sensual woods and musks. The top notes were pink peony and pink pepper, cassia, peach, mango; the heart brought litchi, pomegranate and pineapple; and the base followed with sandalwood, white tea, Teakwood and white musk. The fragrance is intensified by the warmth of your body, rushing out in stronger waves with each movement. Apply in the creases of your skin and neck for a longer-lasting, stronger scent. After applying, avoid rubbing or dabbing skin. This breaks down the fragrance, causing it to wear off more quickly. If you prefer placing fragrance on your wrists, be sure to reapply after frequent hand-washing, since this tends to rinse off the scent.

Gucci is one of the world's most renowned luxury fashion brands, known for its equestrian-themed quality leather goods. Inspired by the beautiful luggage he had seen travelers carrying while working at the Savoy Hotel in London, Guccio Gucci returned to Florence with a goal of combining the refined elegance of the wealthy travelers he observed with the fine craftmanship of traditional Florentine artisans. The company's equestrian-themed quality leather goods were in high demand, and when leather was scarce during World War II, Gucci's innovative use of hemp, linen and jute expanded the brand's aesthetic.an existing fragrance with precious and rare blossoms harvested in the prior year. The Gucci brand is a designer fashion label that's famous for bags, shoes and leather goods. Guccio Gucci passed in 1953 but his sons and grandson oversaw the successful expansion of the company into a luxury goods manufacturer known around the world. The company's signature "double G" logo was adopted in the 1960s. The company's first fragrance, Gucci No. 1 for women, was introduced in 1974. A series of fragrances for men and women have since been launched, with many taking legendary status amongst perfume connoisseurs, including Gucci 3 and L'Arte di Gucci. Tom Ford served as the company's creator director in mid-90s through the early 21st century.

Made To Measure EDT