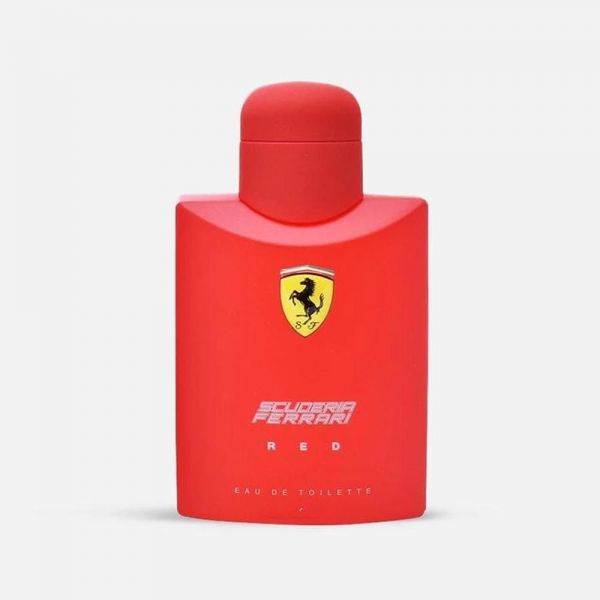 Ferrari Red by Ferrari for Men

The Ferrari Scuderia Limited Edition Formula 1 Silver Scuderia Ferrari Red by Ferrari for Men is a Woody fragrance for men. The nose behind this fragrance is Philippe Roques. The top notes are lime, Pepper, and Artemisia; the middle notes are Lavender, Metallic notes, and Clary Sage; base notes are Leather, Cedar, and Tonka Bean. The warmth of your body intensifies the fragrance of Ferrari Black. Apply in the creases of your skin and neck for a longer-lasting, stronger scent. After applying, avoid rubbing or dabbing skin. This breaks down the fragrance, causing it to wear off more quickly. If you prefer placing Ferrari Black on your wrists, be sure to reapply after frequent hand-washing, as this tends to rinse off the scent.

Enzo Ferrari founded Scuderia Ferrari in 1929 as a sponsor of motorsport events and drivers and manufacturer of race cars. Initially, Ferrari worked with Alfa Romeo and other and supplied them and other competitors with race cars. When in 1947 the production of street-legal vehicles began, the company changed its name to Ferrari S.p.A.

Today we know Ferrari as one of the big names and sponsors of the Formula One motorsport circuit and as a lifestyle brand that offers luxury cars. The brand's logo, a black horse on a yellow background, is world-famous. Milestones in the company's history were motorsport grand Prix wins, the successful launch of road cars, and the so-called supercars.

In 1999 Ferrari made their first steps into a completely new direction by launching the brand's first perfume, Ferrari Black. The oriental composition with sweet notes has been a commercial success since it had hit the shelves. While their cars are financially out of reach for most people, the fragrance gives the wearer the feeling of owning a piece of merchandise from a world-famous and exclusive luxury brand. In order to bring a piece of Ferrari to more and more homes, the brand soon launched their second fragrance, another one for men, in 2001. The name of the woody and mossy scent is Ferrari No. 1. In 2003 a new scent composed of elegant notes around an intense patchouli with the well-thought-out name of Ferrari Racing was launched.

2005 saw the presentation of another men's fragrance called Passion. The bottle and the outer carton were colored in the well-known Ferrari-red. A limited-edition with the name Unlimited was launched the same year. The sweet, spicy, and aromatic composition of Ferrari Extreme hit the shelves in 2006.

As previous limited editions have proven successful, the men's fragrance Ferrari Light Essence, the first one housed in a bottle that is neither red nor black, was released to the market in a blue bottle with a blue outer carton in 2007. In the beginning of 2009 Ferrari launched the supercar Scuderia Spider M16 and the woody, spicy, and aromatic fragrance Ferrari Uomo. The presentation of the fragrance Scuderia Ferrari took place in 2010 - the same year that the new car model 458 was unveiled to the world.

While Ferrari cars are only available to the rich, the fragrances are reasonably priced and have gained a large fan base.