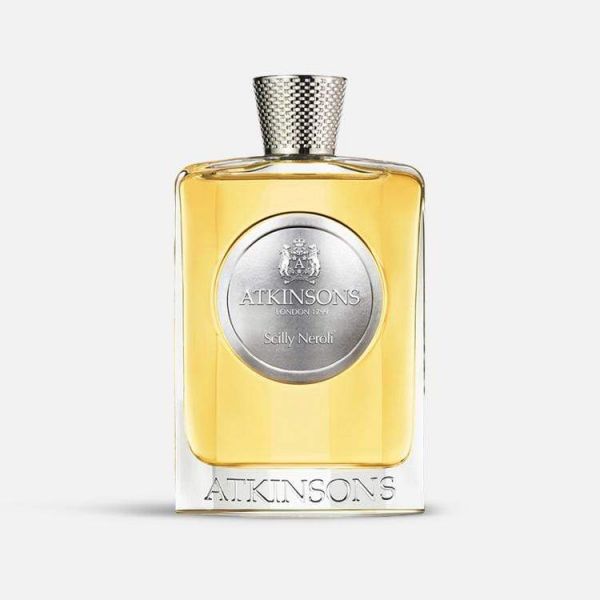 Sea notes, lemon and petitgrain bring a freshness to the floral heart of neroli essence blended with orange blossom on top. The base features ambergris and patchouli that give way to a smooth, yet powerful aroma. Scilly Neroli was created for women with an elegant and natural style. The result is a typical Atkinsons floral fragrance which bursts with romantic floral goodness.

A neroli-based scent, sweetly fruity and fresh with a hint of nuttiness in the base. Complex and intriguing, with a hint of the exotic about it; this is a scent that would suit people who like to blend a little adventure into their lives. A sensual, fresh and clean fragrance. As the name suggests, Scilly Neroli is an island of calm in a sea of citrus notes and scents. It's uplifting with an intense wakefulness that never descends into aloofness.

Atkinsons has a long and proud history dating back to 1799, when James Atkinson first established a soap and perfume shop on London's famous Oxford Street. In 1826 the brand became the official perfumer of the British Royal Family, and from the 1880s it began to be traded throughout Europe. The production of fragrances was expanded after World War II with the launch of the first eau de Cologne and toilet waters, followed by a range of new fragrances for both men and women. And today Atkinsons is a leader in Europe, with its fragrances sold throughout the continent.

The Atkinsons range offers you an attractive selection of fragrances, essences and skin care products, all based on traditional recipes. Its modern production makes use of traditional methods handed down through the generations to produce products of the finest quality.

The Atkinsons collection has been created to represent the simplicity of capturing those moments that can be forgotten and remind you of the scent and emotions they hold. The designer perfume house Atkinsons has 63 perfumes in our fragrance base.

His Majesty The Oud EDP