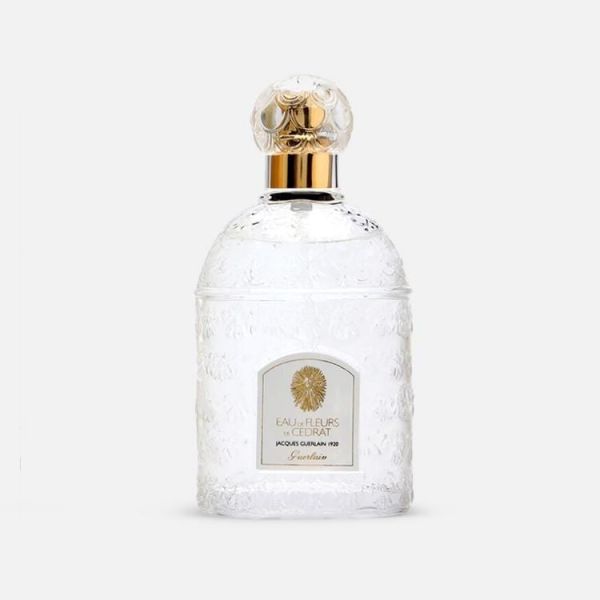 Fleurs de Cedrat is a sensual and bright cologne that embodies the secret voluptuousness of the scents of the Mediterranean. This refreshing and tangy fragrance has a floral-citrus opening. Its special mixture of citrus notes gives it a sunny, juicy touch. Fleur de Cedrat is a discreet yet very sensual scent, which reveals its heart notes as soon as it touches your skin. The base notes will leave your skin subtly wrapped in a fragrance which suggests an ever so light yet persistent trace of something sweet.

The secret of this perfume is a beehive sandwiched between two glass plates, from which the air has been extracted to preserve its scent. The bees pictured on the glass hive carry all kinds of flowers and fruits, illustrating this perfume's beautiful citrus notes. A creation full of poetry and light-hearted creativity, a sparkling creation that will please the senses and enhance your femininity.

The bottle of Guerlain's Cedrat Eau de Cologne has retained its original elegant and contemporary design since the mid-18th century. Its faceted silhouette and base adorned with a golden bee recall the emblems of House of Guerlain: the bee, symbol of the Empire, honoured by Napoleon I who gave it to Jean-Fran §ois Guerlain, founder of today's House, in recognition of his exceptional talent in creating perfumes worthy of an imperial Court. This emblem is also that of our prestigious family business continuing since then to be handed down from generation to generation.

Guerlain is a luxury cosmetics and perfume house. It is housed in the original 1828 Parisian boutique that year's later became its first actual shop on Faubourg Saint-Honore. Today, the Guerlain Perfume House is under the name and creative direction of Pierre-Francois Pascal Guerlain and his daughter, Marguerite.

Guerlain products stand out by their exclusive and incomparable blend of tradition and modernity, of innovation and excellence. They express all that is the essence of Guerlain, the expression of a profound knowledge and passion for excellence.

The entire history of Guerlain is steeped in the grand tradition of Haute Parfumerie and is synonymous with a tradition of excellence and a respect for luxury. It has always been a family run tradition with a French quality spirit at its root. More than merely beautiful, every fragrance bears the stamp of emotional depth and tenderness - elusive not only to men but also to women.