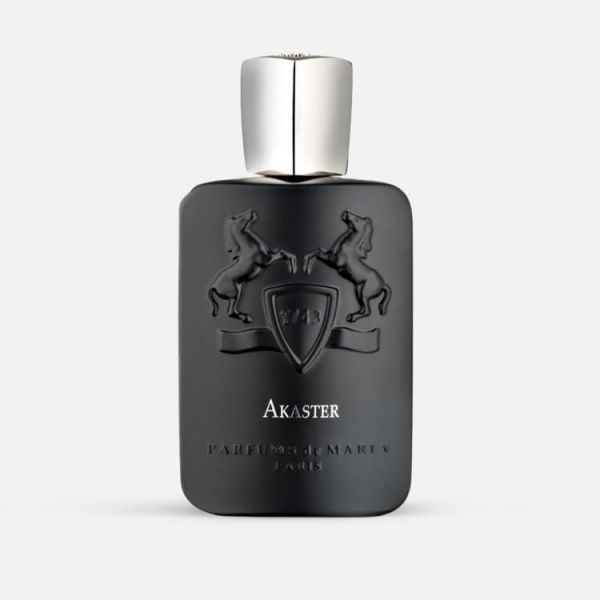 This daring Eau de Parfum exudes strength, power, mystery and seduction while remaining true to Royal Essence's iconic scent. A modern chypre for the new millennium, the Akaster woman is an ode to Parfums De Marly's heritage of perfume craftsmanship. Akaster by Parfums de Marly is a Amber fragrance for women and men. Akaster was launched in 2015. he experience evoked by the senses is pure emotion. With its sumptuous notes, Royal Essence captures the essence of its wearer and unleashes it to conquer all other scents.

Royal Essence is a true mix of different floral and woody notes. The Oud known for its smoky, sensual and mysterious characteristics and African Geranium with its woody, slightly powdery and clean notes pair up to create a magical duo. These notes are joined by Cypress, the crisp and fresh top note, whereas Lemon adds a brightness similar to bergamot. A base of Rose and Cardamom exudes softness through its subtle floral notes.

Using natural essences, this perfume oil transports you to another world. A truly addictive scent due to the oud, an ingredient traditionally used in Arabian perfumery since time immemorial, which has always been one of the Parfums's De Marly's favorites.

The company Parfums de Marly was founded in Paris in the late 1890s by Theo Gaechter. The Maison was then transferred to Grasse on the French Riviera, where it has been producing its fine fragrances ever since. Parfums de Marly is a master of raw materials and a proponent of craftsmanship.

This is a new interpretation of an ancient tradition. A fragrance, which exalts the lineage of the heritage of the Parfums de Marly house with a very modern bottle, an entirely new perfume, but still respectful of its great tradition. The new livery retakes the tone of the first creations made in the XVIII century on Louis XV´s request. It uses natural gold and silver leaf to cover black lacquer boxes inspired by the artistic boxes of that time.

The superb quality of the packaging evokes the sumptuous leather-bound trilogy that contained the precious perfume. Bottles, made of handcrafted crystal, have a cylindrical shape and a base which is engraved with a picturesque scene from the Palace of Versailles. Booklets for each fragrance are inscribed with precious invites to the race on the occasion of the 10th anniversary of Parfums de Marly. Touching silver-colored medallions on caps evoke memories of the gold medal won by Parfums de Marly on winning races at Longchamp in 1991.