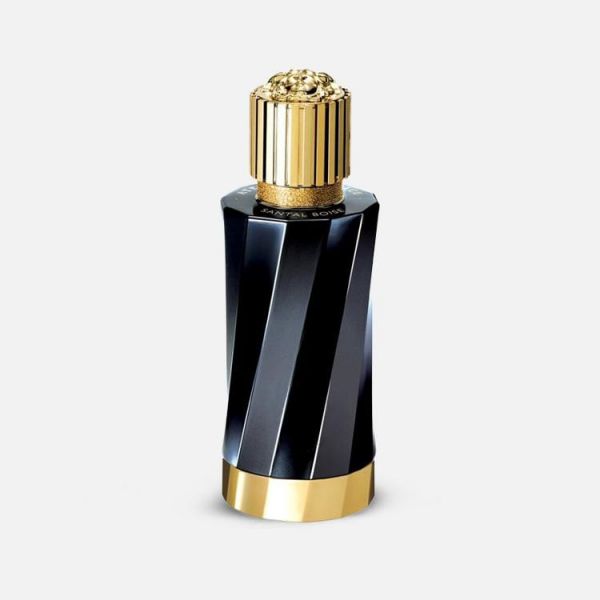 Versace has launched a collection of six perfumes, inspired by the Atelier Versace Collection. The custom scented creations bear the names Cedrat de Diamante, Eclat de Rose, Figue Blanche, Jasmin au Soleil, Santal Boise, and Vanille Rouge. Each of the creations has an ingredient as a theme, and five perfumers worked on its development. Christophe Raynaud signed Santal Boise created by mixing Sri Lanka sandalwood with saffron and a cypriole plant. The Versace Eros Pour Femme and Versace Eros Pour Homme six fragrances come in the same glass bottle, offered in a translucent version and in a sleek black alternative to distinguish gentle scents from the more intense ones. All bottles feature handmade elements inspired by Versace's fashion collections and brand signature style. The heavy gold cap contains the Medusa head logo. The fragrance is intensified by the warmth of your own body. Apply to the creases in your skin and neck to keep the scent stronger, longer. After applying, avoid rubbing or dabbing skin. This breaks down the fragrance, causing it to wear off more quickly. If you prefer placing scent on your wrists, be sure to reapply after frequent hand washing, as this tends to rinse off scents.

Versace is an Italian fashion design house founded by the late Gianni Versace. Debuting with a line of women's wear in 1978, the company was an instant success. A men's line and the company's first boutique in Milan followed in that same year. Gianni Versace chose the Medusa symbol as his company's logo. The company's luxurious clothing and accessories are characterized by influences ranging from pop art to classical Greek and Roman architecture. Versace became a favorite amongst celebrities. Elton John was an early fan of Versaces fashion forward designs, and the house is unique among Italian fashion houses for its consistent use of celebrities in advertising campaigns. Celebrities who have at one time been the face of Versace include Madonna, Ashton Kutcher, Britney Spears, Halle Berry, and more. Some credit Versace with contributing to the "super model" phenomenon of the 1990s when the house cast every top fashion model for its 1991/1992 Autumn/Winter runway show.