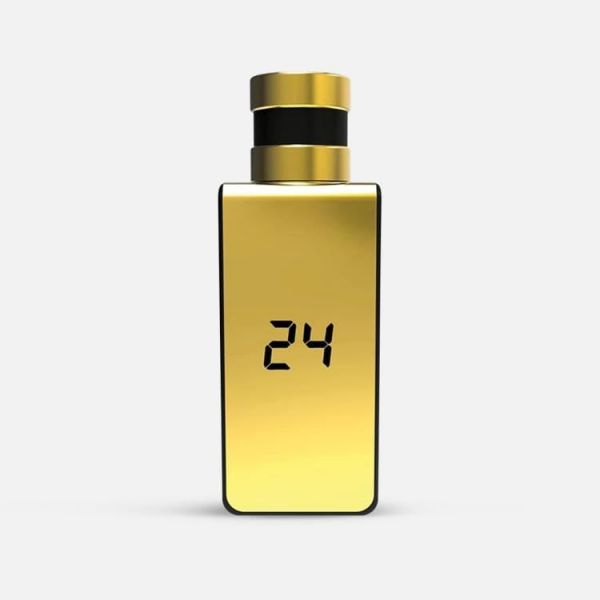 A nectar of luxury and a symbol of power and success. Elixir Gold encompasses the perfect balance of seduction and mystique, revealing a new level of genuine, captivating drama. As a mysterious and surprisingly charming scent, Elixir Gold will stay with you for a long time. This is a fresh scent that creates a pleasant aura in your environment. Its woody smell is coupled with gentle spicy tones, which add warmth to its character. It is an oriental fragrance for men and women. The 24 line was created by Scent Story in 2015.

24 Gold Elixir EDP by Scent Story features notes of cardamom and pine tree at its top for a warm and captivating opening. The fragrance then unfolds into a heart of honey, coconut, saffron and floral notes complemented by the velvety undertones of guaiac wood. 24 Gold Elixir EDP is rounded out with warm base notes of amber, vanilla and cedar to leave behind a gorgeous trail on your skin.

Elixir flacon is covered with the finest golden-yellow coloured enamel depicting an eastern fairy tale. Gold, the elixir of life, symbolising success and power. There are two layers of twisted gilded metal around its slender waist; one of them depicts the world, the other - the sun. The stopper is represented by a golden lotus flower. The Packaging for the bottle of the 24 Elixir Gold is simple but elegant and has two gold rings on it which makes it more rich and luxurious.

Scent Story is the officially licensed brand by Fox to produce 24: The Fragrance. Its vision is to be the most successful fragrance company within the Middle East. The new venture began in 2009 with the launch of the first 24: The Fragrance under licence from 20th Century Fox Consumer Products.

Scent Story is Dubai's first entertainment perfume brand. Their original line, 24: The Fragrance caters to the fans of the popular television series 24, which has been credited with creating a global interest in tactical espionage thrillers. The company has produced seven different varieties of the fragrance so far, each with its own unique design that is inspired by characters or aspects of 24.

Scent Story's mission is to create authentic character inspired products that allow consumers to step into the worlds of their favourite TV themes. With over 400 million consumers worldwide, the Company has built a strong multi-brand licensing business, spanning fashion, health and beauty, consumer lifestyles, accessories and collectables.