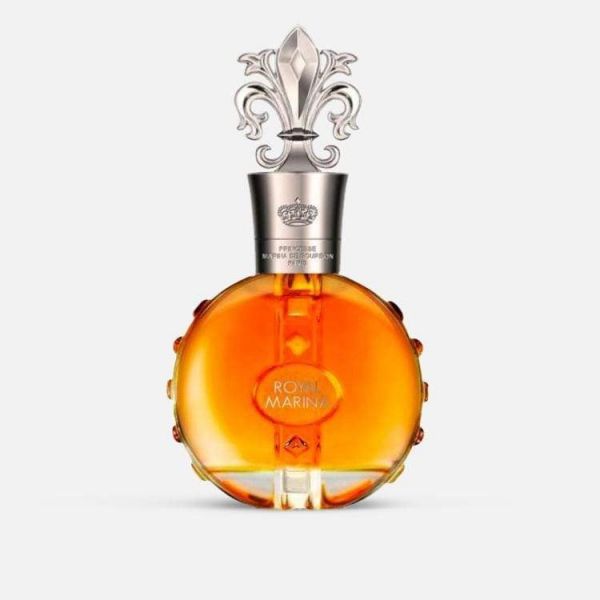 Marina de Bourbon Princess presented Royal Marina Intense exclusively at the TFWA in Cannes, as a part of Royal Marina collection of fragrances. Royal Marina Intense symbolizes treasure brought many years ago during the French royal expedition to the Orient. Inspired by gems from the crown, heritage of French nobility: diamonds, gems and Amber jewelry, conveys their beauty, wealth and splendor in vivid and intense way. The composition was originated by the idea of Marina De Bourbon herself. Exotic and refreshing blend of acai berries and amaryllis opens the composition by announcing jasmine flowers and iris warmed with tonka in the heart. Delicate powdery-floral heart is supported with patchouli and vanilla, rounded up with balmy notes and gourmand warmth of musk.

The new edition of Royal Marina Intense arrived in the same flacon form as previous editions, Royal Marina Diamond, Royal Marina Rubis and Royal Marina Turquoise. The fragrance is available as 30, 50 and 100ml Eau de Parfum and as miniature 7.5ml accompanied with perfumed body care lotion. Amber color was selected for fragrant liquid, while outer carton is characteristic for a combination of copper color and dark gold color. This fragrance has already been on the market since October 2015.

Marina de Bourbon is a French perfume house founded by Marina Gacry, whose husband is Prince AndrÃƒÆ’Ã‚Â© of Bourbon-Parma, a member of the ancient Bourbon of Parma dynasty whose members ruled over France, Navarre, the Kingdom of Naples, and the Duchy of Parma. Marina Gacry was born on September 5 the same birthday as Louis XIV. Surviving a difficult childhood, she would become in just a few years a very pretty young woman with a determined and hungry character and in love with knowledge.

Prince Andrzej is a descendent of the Bourbon-Parma Family. In order to finance her studies, Marina accepted a position under the famous hairdresser Alexandre de Paris, becoming his main assistant. As assistant to one of the most prominent hairstylists in Paris, Marina rubbed elbows with some of Europe's wealthiest, most powerful and famous names. Having conquered this social circle with her charm and intelligence, she was invited to St. Tropez one summer by Prince AndrÃƒÆ’Ã‚Â© of the Bourbon-Parma family. Together they returned to Paris and were eventually married in 1960.