The store will not work correctly in the case when cookies are disabled.
Dune EDT Men
Refer Friends
Dune EDT Men
37.5 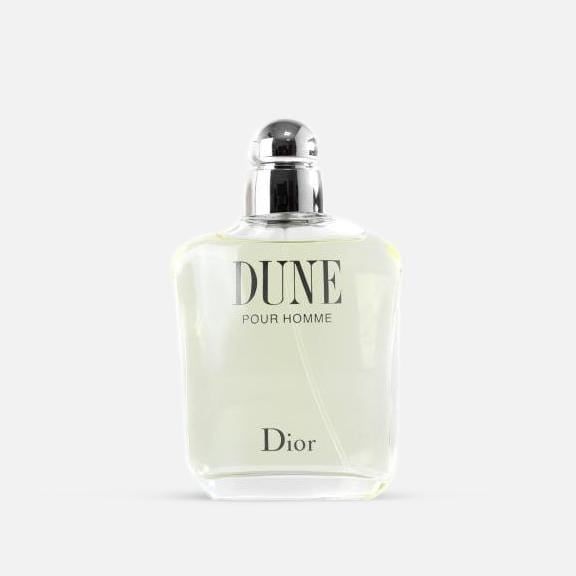 Dune Men by Dior for Men

Dune Cologne by Christian Dior is a woody balsamic fragrance for men. The scent was created by Nejla Barbir and Jean-Louis Sieuzac. Its top notes consist of bergamot, mandarin, palisander, aldehyde, peony, and Brazilian rosewood. Its heart notes feature jasmine, rose, ylang-ylang, lily, lichen, and wallflower. Its base notes finish off the fragrance with patchouli, vanilla, benzoin, sandalwood, oakmoss, amber, and musk. This eau de toilette has moderately heavy sillage and is long lasting. Pure Dior perfume is intensified by the warmth of your own body, as it blends with your natural scent. Apply in the creases of your skin and neck for a longer-lasting, stronger scent. After applying, avoid rubbing or dabbing skin. This breaks down the fragrance, causing it to wear off more quickly. If you prefer placing on wrists, be sure to reapply after frequent hand-washing, as this tends to rinse off the scent.

Dior's fashion background included working for or alongside other well-known fashion (and perfume) legends of the mid-twentieth century. He entered the fashion business working for Robert Piguet, and later worked at Lucien Lelong with another up-and-coming designer, Pierre Balmain. Dior introduced the "New Look" in 1947. It represented a radical departure from the simple, fabric-conserving styles of World War II and was hugely influential in women's fashion, as well as helping to re-establish Paris as a fashion capital of the world.

The house of Dior issued perfumes to match its new fashions, launching company Parfums Dior and its first fragrance in 1947: Miss Dior, named for the designer's sister Catherine.

Christian Dior passed away in 1957, but the fashion and perfume houses that bear his name live on. The Dior brand name is known worldwide for its haute couture collections, luxurious ready-to-wear fashions, cosmetics and fragrances. Today, Christian Dior is also the main holding company of multi-national luxury goods conglomerate LVMH.