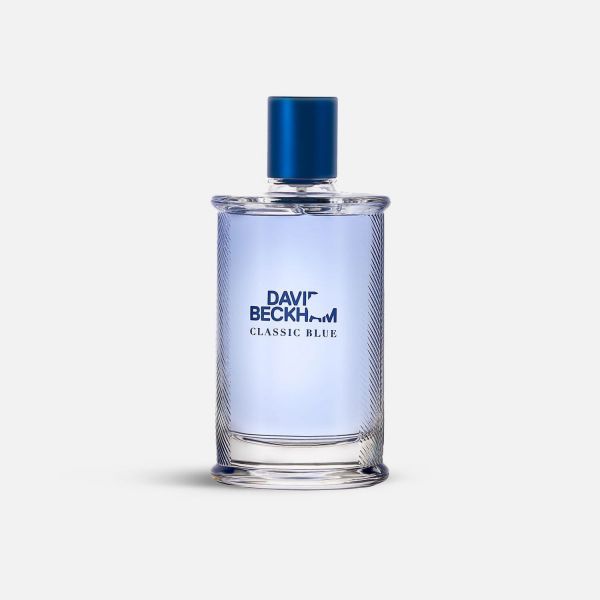 David Beckham unveils his new fragrance Classic Blue. Inspired by the classic style and elegance combined with modern details, he says it is a modern interpretation of timeless scent. It has a bolder composition than the original and opens with fresh accords of pineapple, grapefruit, and violet leaf. The heart consists of geranium, clary sage, and apple and is laid onto a woody base of cashmere, patchouli, and moss. David Beckham Intimately is a signature fragrance for men. The fragrance is intensified by the warmth of your own body. Apply in the creases of your skin and neck for a longer-lasting, stronger scent. After applying, avoid rubbing or dabbing skin. This breaks down the fragrance, causing it to wear off more quickly. If you prefer placing fragrance on your wrists, be sure to reapply after frequent hand-washing, as this tends to rinse off the scent.

He began his career at age 17 when he signed a professional contract with Manchester United. During his time there, United won six Premier League titles, two FA Cups and the UEFA Champions League, and the World Club Championship in 1999. In 2003, Beckham signed with Real Madrid, where he played for four seasons. In 2007, Beckham crossed the pond to play for the LA Galaxy, signing a record-breaking five-year deal and being loaned under a unique time-share agreement to AC Milan in 2009 and 2010.

Victoria Beckham, also known as Posh Spice, rose to fame as part of the all-female pop group The Spice Girls. Posh and the other Spice Girls quickly rose to the top of the international pop charts in 1996 with their first hit ÃƒÆ’Ã‚Â¢ÃƒÂ¢Ã¢â‚¬Å¡Ã‚Â¬Ãƒâ€¦Ã¢â‚¬Å“WannabeÃƒÆ’Ã‚Â¢ÃƒÂ¢Ã¢â‚¬Å¡Ã‚Â¬Ãƒâ€šÃ‚Â and a series of number one singles followed, along with world tours and a popular film. The Spice Girls were some of the most successful recording artists of the late 20th century.

Victoria Beckham has always had a passion for fashion. She started modeling at the age of 15 before serving as a fashion consultant. Since quitting her job in 2000, she has modeled, served as a fashion consultant and editor, and launched her own line of accessories, jeans, dresses, and fragrances. The attractive and stylish couple was dubbed ÃƒÆ’Ã‚Â¢ÃƒÂ¢Ã¢â‚¬Å¡Ã‚Â¬Ãƒâ€¦Ã¢â‚¬Å“Posh and BecksÃƒÆ’Ã‚Â¢ÃƒÂ¢Ã¢â‚¬Å¡Ã‚Â¬Ãƒâ€šÃ‚Â by the media. They first met in 1997 and were married in 1999. The couple currently has four children.

David Beckham has worked with Coty to develop a comprehensive fragrance range. David BeckhamÃƒÆ’Ã‚Â¢ÃƒÂ¢Ã¢â‚¬Å¡Ã‚Â¬ÃƒÂ¢Ã¢â‚¬Å¾Ã‚Â¢s Instinct for men was the first fragrance from the pair, issued in 2005. His and her versions of many other fragrances have been issued, such as Intimately Beckham for Her and For Him from 2006. Advertisements for the fragrances typically feature provocative photos of the couple, all helping to make the Beckham fragrance range one of the best-selling celebrity lines in the world today.