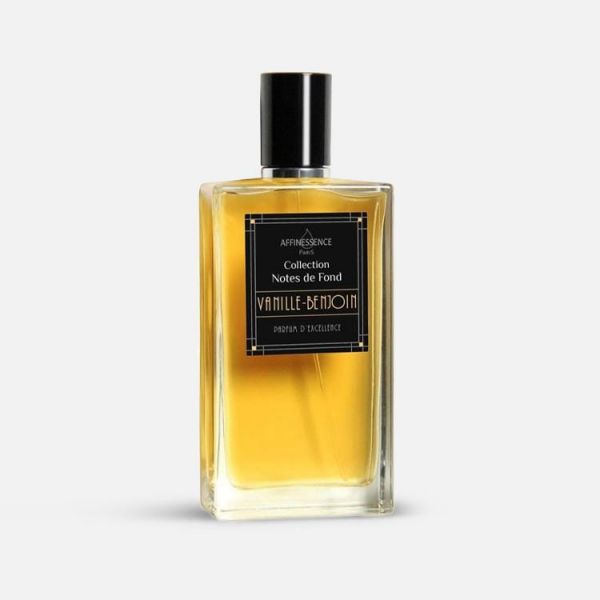 Vanille-Benjoin by Affinessence introduces a modern rendition of the popular fifty-year-old vanilla fusion, Vanille Noire - which was well known to both the French and Algerian upper classes. Embrace a sensual journey of eclectic notes, revealed in the fragrance's openness. Vanille Benjoin by Affinessence is a Amber Vanilla fragrance for women and men. Vanille Benjoin was launched in 2015. The nose behind this fragrance is Corinne Cachen. Expertly crafted, this refined aroma evokes tradition while still feeling modern, making it the perfect choice for any man to wear both casually or formally.

For the woman who traverse borders with grace, even as she explores sexual territory of her own making, Vanille-Benjoin is her companion, in a world where a woman's voice of pleasure speaks for her, in a world where deeds are not about possessions but about relationships. Notes include: Tahitian vanilla, Madagascan vanilla, Siam benzoin, Moroccan cedar, Chinese cedar and Tonka bean. The fragrance has a powdery benzoin and vanilla heart with oriental undertones.

Vanille-Benjoin is a scent that evokes a feeling of curious exploration. Benjoin is an encounter between eastern sophistication and the daring freshness of an exotic tropical woody accord. In the world of perfumes, woody notes offer a warm and intense sensation. This accord proposes to explore all its facets through the magic of vanilla. Vanille-Benjoin is a modern vanilla built around a mysterious, sensual undertone to create an air of duality in this classic fragrance.

Sophie Brunetau is the founder of Affinessence, a perfume consultancy company which offers you a range of services from marketing strategies to the finished product. Sophie has over 10 yearsÃƒÂ¢Ã¢â€šÂ¬Ã¢â€žÂ¢ experience working in the fragrance industry, in Paris and abroad. She launched her own consultancy company in 2013 under her original name, Affinessence after having worked for LVMH and other major firms. Always on the lookout for new trends and innovations, she also has a consulting agreement with Amorim Onofre, one of the world's leading companies in olfactory performance.

AFFINESSENCE offers a new type of perfume, just like when it gave us the first French perfumes and was the first to launch a men's series. Today the brand launches its first collection of fragrances corresponding to the three stages of a woman's life.

AFFINESSENCE, is made up of a team of experts dedicated to creating a style of perfume customized for each customer. ItÃƒÂ¢Ã¢â€šÂ¬Ã¢â€žÂ¢s not just the scent itself that matters. The packaging and overall design are just as critical. AFFINESSENCE offers a valuable range of services aimed at designing a concept, a tailored fragrance and market positioning, in addition to the classical mix of creation and expertise. By working directly with its customers, AFFINESSENCE can offer its clients everything from one-off consultation and development to an entire turnkey project.

Delicate, mysterious and sensual, AFFINESSENCE is a way of life. This fragrance collection was created around the concept of well-being. Created to be artful, elegant, sophisticated and exquisitely refined, AFFINESSENCE attracts with its signature scents which evoke calming sensations and stimulate vitality. An aphrodisiac for the senses.